Its highly unlikely that you’ve ever given much consideration to your carpet other than it needs a hoover. But consider this, where and why do we have them? It’s easy to dismiss the everyday item as trivial but if you look closely you’ll see that they have great importance and a rich history of their own. Take a look at the following article for more information https://wonderopolis.org/wonder/who-invented-carpet

Where do carpets come from? Whilst there are many variations now it is thought that the first examples were around the Neolithic period. Unfortunately, it is difficult to gage this as most were made from materials, such as wool, that they do not survive, and archaeologists rarely find evidence for them. Some academics believe that they were just there as rudimentary floor covering to keep out the chill, much the same as we do now, except in a yurt or other temporary dwelling. However, there are also theories that suggest they were very special items in the home used to establish identity and to simply look impressive and beautiful, suggesting a more settled people who did not have a hunter gatherer existence. Remains of carpet in Siberia (found encased in ice, the cold protected them) suggest that both theories are right. They had a practical and aesthetic purpose and were used so that the animals could keep their precious hides and not be needed. 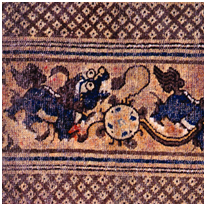 The earliest evidence of large scale carpet production and use has mainly been found in the middle east from about the 2nd and 3rd BC onwards. The region is seen as the birthplace of the carpet. As people migrated out of the area to expand they took the skills with them to the native people they encountered who began to develop their own distinctive style.  They were seen and recorded by the great traveller Marco Polo as he journeyed through Turkey. Polo record that the best carpets were made using silks and cloth of an extremely colourful hue. 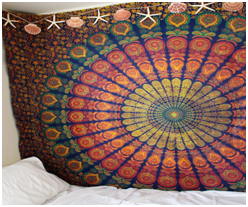 Any carpet made before 1920 is seen as being an antique or semi antique.  These early carpets were woven by hand operated looms and used natural dyes. There ability to survive the elements is highly respected but it’s unlikely you’ll see one lying around the house anymore as most are in museums on display. The semi antique era dates from 18-60 to 1870 up to 1920. These carpets are more numerous as they have used synthetic dyes and are possibly made on a machine. The Persian and Turkish style dominate the era with intricate decorations and motifs designed to enchant the eye.  The modern carpet is anything woven after 1920 onwards. Following western influences, the desire for a decorated carpet has fallen away somewhat to the plain and more functional ones we see today. At one time though Carpets were also favour as wall hangings though it is rare to see these in use in modern homes. They still provide the practical yet comfortable purpose that our ancestors used them for almost 3000 years ago.

Carpets of the past were much treasured and looked after. In order to treat your own carpet with as much care you should have them cleaned regularly by a professional such as http://gnccontractservices.com/ who provide Cheltenham Carpet Cleaning .