Ever seen a Flea circus? Probably not, but that’s sort of the whole point as we shall see. You aren’t really supposed to see the little darlings close up. They are industrious little beasts, apparently, and if you get the chance its well worth viewing. The Fleas perform all sorts of wonders pulling carts, kicking balls about and performing circus acts like the trapeze and the high dive into barely any water at all. There is a reason for this, it’s all an illusion.

In the original Jurassic Park John Hammond, sad and full wistfulness, his dreams of a wildlife park with real dinosaurs strutting about melting away like the chocolate ice cream he is consuming makes mention of his first forays into the world of event management. It transpires that he once owned a flea circus. Presumably it must have been one to of the most successful in the world if it led him to own a multi-million-pound entertainment company capable of cloning extinct creatures but that just shows you the selling power of fleas. His main complaint is that there are no real fleas in a flea circus. It’s all trickery and very cleaver intricate mechanics.  The first flea circuses were made by watchmakers in a clever bit of marketing to advertise their skills. “If I can make you think there are tiny insects, that I have apparently trained, to do this just imagine how well that pocket watch will work!”, seems to be the angle. This was also a way of demonstrating who small and intricately they could work. A lock and chain were made for a flea which must have required hours of patience. The circuses were purchased and used by magicians and impresarios to astound the audience. Mostly though they became 2-bit side shows in flea markets ironically or as a little side street distraction for those wanting to be entertained for a bit. 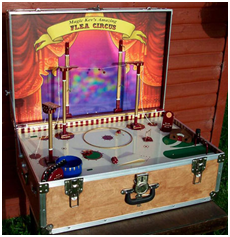 Hammond is annoyed because he fells that the public are being cheated, which is a matter of opinion because hopefully they should be impressed with the craftmanship that’s gone into the making of the machinery. “I wanted them to them to see the fleas!” he moans dejectedly. As opposed to using animatronic dinosaurs which would d have been cheaper and probably less costly in terms of lost lives. Hammond could have seen fleas if he had wanted to. There was flea circus that used them, but they could never be trained. Records state that the fleas were glued to the floor of the flea circus and then small instruments glued to the fleas in turn. The whole stage was heated and as the fleas attempted to escape they moved as if they were playing the instruments. This hardly counts as being a humane practice now but at the time it was dynamite. Perhaps Hammond should have stuck with the old flea circus. Some, mechanical ones are still in use today though they are rare.

If fleas are causing you to have Itchy Dogs then take a look at https://www.stinky-stuff.co.uk/product-cat/dog-remedies/ for their natural products to help your dog and cat feel less itchy and annoyed by those pesky fleas. The RSPCA also gives some general advice on dealing with fleas.