You’d be surprised at how many Hollywood movies have had a log cabin or wooden retreat as the backdrop to the story. Log cabins seem to be favoured by horror writers, perhaps due their isolated location. They do, however, feature in comedies, romances, family films and thrillers. It seems that Hollywood really does love a log cabin! Here are examples of just a few:

This movie was based on a novella written by the legendary horror writer, Stephen King. The story follows an author (played by Johnny Depp) who has a psychotic episode after finding his wife with another man. He heads out to the woods for some rest and isolation, but things get a little bizarre. It’s a good psychological thriller and the cabin on the lake is truly stunning.

Another lakeside dwelling features in this colour movie and it’s one of the most beautiful to be used in film history. Located in Maine, it features a massive outside decking area and surrounded by woods. However, this film noir introduces us to a femme fatale who doesn’t care what disaster and heartbreak she leaves in her trail. The movie was a box office success and classic, fun piece of cinema that starred Gene Tierney and Vincent Price. For your very own, slightly smaller, Log Cabins Northern Ireland, visit http://logcabinsnorthernireland.com/

Directed by Lee Tamahori, this is movie is all about survival. Starring big names Alec Baldwin and Anthony Hopkins, it wasn’t one of their best movies, but still deserves a watch, not least for the two amazing cabins. It’s all about opposites. The gigantic and breath-taking cabin being used for a photoshoot at the start of the movie to the tiny, basic cabin that Baldwin and Hopkins are trying to survive in later in the film, when they are stranded in the freezing wilderness. 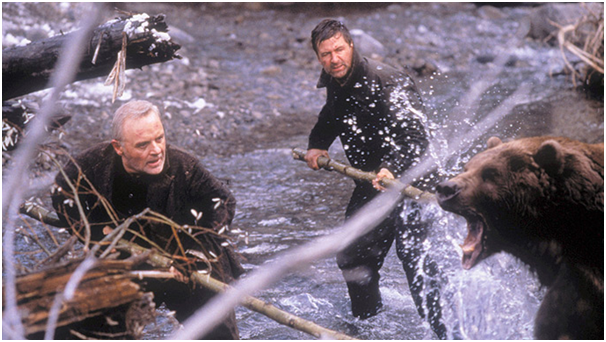 This is the iconic movie that launched an entire genre. Directed by Sean Cunningham, the film was also responsible for launching the concept of the franchise film. Now cinema-goers could see teens at summer camp being gruesomely murdered every year!

The cabins that appear in Friday the 13th aren’t much to write home about, just normal camp cabins lined up in a row. What makes these cabins so memorable is the gory way in which each cabin witnesses a different crazed murder scene. It was a horrible yet fascinating film that inspired a whole generation of new horror writers to create their own depths of despair – probably in another log cabin somewhere!