Granted, rugby probably isn’t the first sport to leap to mind when you think about applying modern technology. You may be surprised, however, by some of the ways in which the top international, regional and club sides are adopting wearable technology, the cloud and big data in an effort to improve their game. 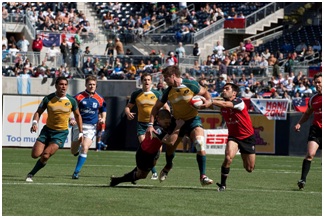 Nothing new to the round ball game, GPS is a more recent newcomer to rugby. Look carefully and you will likely have noticed the small bulge between players’ shoulders where the tracking device is sewn into their shirts.

Live syncing data from these receivers into the cloud and viewing it on laptops allows coaches and managers to make better informed decisions in-game and to identify potential substitutions or tactical changes that may be needed.

Using GPS data in the cloud for post-match analysis is also something that many of the major teams are now utilising to great effect.

The data, especially when combined with multi-angle TV replays, allows for truly in-depth analysis of player performance in all aspects of the match, leaving no place to hide.

All of this analysis and data is all well and good, but only if the players and back-room staff put it to some use. That, of course, is where old-fashioned hard work comes in. Careful analysis of the big data gleaned from GPS and other tech can help coaches to compile a well planned and individualised programme of rugby drills for each player in the squad. Drills such as those found at http://www.sportplan.net/, tailored to each player in this way, are more likely to improve the performance of the whole squad, than a one-size fits all approach.

Perhaps the most significant gain of all to be had from technology in the rugby world, though, is in keeping players safer. As proved in the 2015 Rugby World Cup where Hawk-Eye was successfully used to help prevent, treat and manage serious head injuries, somebig steps forward have been made towards keeping players safe.

Although the use of Hawk-Eye in the World Cup was officially only a trial, players, doctors and officials alike hailed it as a great success. Therefore, it is only a matter of time before we can expect to see it rolled out further.