The county Capital of Wiltshire, Salisbury is a fascinating place to visit. It is one of the oldest of the UK’s cities and is very close to one of the UK’s most ancient monuments, Stonehenge. What is there to do in this vibrant old city? The city is dominated by it’s mighty Cathedral, which promotes it to a City. It used to be a part of the settlement of Old Sarum built in part from the stones at Stonehenge, a prominent hill fort just outside of the city but with the construction of the Cathedral the power shifted and so did the people coming into the location. 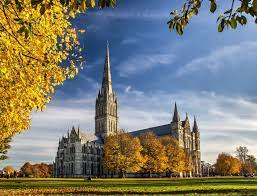 The Cathedral, which in itself is a day trip, contains a copy of the Magna Carta which is seen as one of the first steps towards an open and democratic society that protected the rights of its citizens. There are plenty of boutique shops to browse and classic pubs and coffee shops to take a breather in and take some refreshment. The city has an excellent Park and Ride which makes life a lot easier rather than trying to park in the city itself. Dating back to the year 900 it still has some of the medieval streets and byways which are definitely not car friendly.

Mompesson House in the historic Cathedral close is a beautiful example of Georgian architecture but you’ll need your National Trust membership to get in or you may have to pay. There are so many wonderful Local things to do in Salisbury. Just look at https://www.localthingstodo.co.uk/locations/things-to-do-in-salisbury/ for more ideas.