If you’re in the midst of planning your wedding this year and agonising over design choices you might have wondered about the history of the wedding invitation? When did people begin officially using invitations to invite guests to their celebrations? How were they designed and created and were they very different to what we use today? For Handmade Wedding Invitations, visit https://www.looneylizardcreations.co.uk/handmade-invitations/wedding-stationery/.

The early 1700’s saw wedding invitations normally declared verbally. Announcements were typically shouted in the town square by the town crier and whoever heard the invitation was welcome to the wedding, unless the families didn’t get on of course! Invitations weren’t hand written because back then most normal people couldn’t read or write unless they were from a wealthy or royal family. For those who had plenty of money, they would often employ Monks to pen their invitations as they were known for their beautiful calligraphy. Many of these families also had the family crest added to the invitation. This was also used as a means for identifying the family to those who were virtually illiterate. 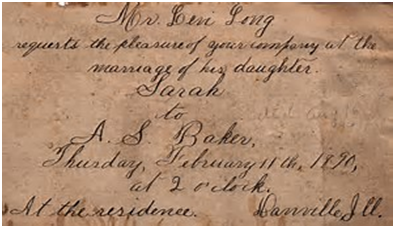 Sometimes with high quality wedding invitations you will find a delicate piece of tissue paper placed inside it. Interestingly this is a piece of tradition dating back to the 1600s. Metal plate engraving was invented at that time but would easily smudge so a small piece of paper was placed on top to prevent this from happening. That custom was simply passed on to preserve the delicate printing of wedding invitations and continues to be commonly used today.

Another tradition is to send out wedding invitations with two envelopes and this a custom from history as well. Before the 20th century, the postal service wasn’t very reliable and was virtually nonexistent in certain areas. The only guaranteed way to deliver a wedding invitation was by hand delivery, usually sent by a hired courier or servant of the family. The invitation might not arrive in the cleanest and most presentable of conditions as most deliveries were made on horseback. So, the double envelope was designed. Once the courier reached his destination, he handed the invitation to the butler or housemaid, who then removed the outer envelope and handed the inner envelope along with the invitation to the master or mistress of the house.

Back in the days before television and entertainment, a local wedding might be considered the social event of the year in some towns and villages and therefore often families wished to limit the number of actual guests, so that undesirables did not attend. To ensure this, the invitations typically included a card which was to be presented upon arrival at the ceremony. For those families who really wanted to be organized, pew numbers were also assigned to the wedding guests, and this number would be placed on the pew. Many customs from the past remain today and while the formality and wording may have altered, the central themes and ideas are the same.