Dr Marten shoes and boots have enjoyed huge popularity throughout British culture. Launched on April Fool’s Day 1960, the success of the brand has certainly been no joke. Worn professionally by police officers, postmen and factory workers alike, they have also been the iconic footwear for different generations in popular culture.

They have not always been associated with positive images as they were once a must-have footwear item for the skinhead subculture and football hooliganism. As the skinhead culture became progressively more violent, they then became associated with violence perpetrated at football matches. During the early part of the 1970s, it became fashionable for football fans to paint their boots in their team colours or white. Many youngsters looking for trouble would also remove the leather from the toe of the boot to expose the steel toecap underneath. Stadium officials and the police even got supporters to remove their boots during games, only getting them back once opposing fans had departed the stadium.

Dr Marten boots also became associated as a symbol of British nationalism. Many have noted the irony of this, as the boots were originally designed by Dr Klaus Maertens, a physician in the German army during the Second World War. He designed the now iconic ‘air-cushioned’ sole. He had suffered a foot injury during a skiing accident and found the army standard-issue boots almost unbearable to wear. He made his own shoe and sold the patent to a British shoe manufacturer in 1959. By 1960 the Dr Marten was available to buy in this country with its famous yellow stitching detail and ‘AirWair’ tag. 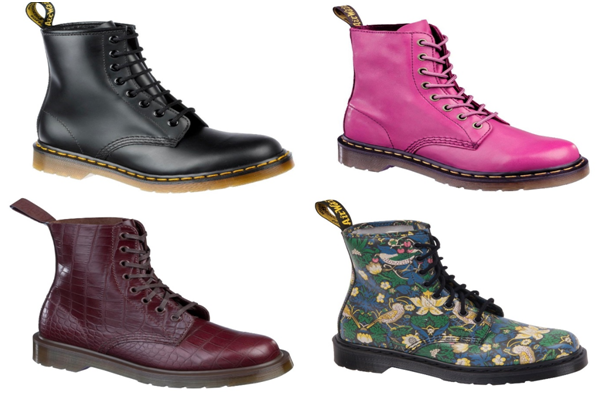 Little did Dr Marten know that his invention for curing pain in his own feet would later be adopted by so many subcultures. The boots have thankfully enjoyed a return to more positive associations since the days of football violence and skinheads. That is surely a testament to their quality, timeless appeal and comfort.

Music trends have also claimed the boots for their own, including the rebellious, expressive punk movement and the grunge movement that rose out of Seattle in the late 1980s and 1990s. Bands like Nirvana, Pearl Jam, Soundgarden and Alice in Chains were part of a musical movement whose followers donned lumberjack shirts, leather jackets, ripped jeans and of course, Dr Marten boots.

Nobody, especially not Dr Marten, could have predicted the huge rise in popularity among young women and girls. Trends have seen women wearing them on their wedding day, the white patent leather variety of course. Not one to miss an opportunity, the company decided to manufacturer a special wedding boot, complete with gold and white lace. For Dr Martens Shoes Gloucester,visit https://www.cottersshoes.co.uk/product-category/brand/dr-martens/

The shoes are perfect for many activities and are worn as school shoes, work shoes and for smart, business wear. The boots have also been associated with fashion, in many different ways but remain as popular today as they have done over the last 60 years.