During the past few years the image of yoga has changed gradually. While in earlier days, when one would think about the term yoga one would think of a group of people in white, sometimes standing on their heads and at other times doing strong breathing. Now, since there is a change in the image and more number of socially known people of the society including celebrities have started giving importance to fitness and yoga, we think of well shaped figures of the icons we fantasize of.

If you want to remain fit by practicing yoga you need to the basic types of it. Yoga, since it is very ancient, most of the types contain the same old postures. What varies from one type to the other is the point of focus. The various reasons for which people practice yoga vary. While some want to increase the strength of the body other may want to increase the flexibility. Depending on these requirements the various types of yoga change their focus. Some of the yoga types also focus mainly on breathing, relaxation and meditation to have fitness thru yoga. 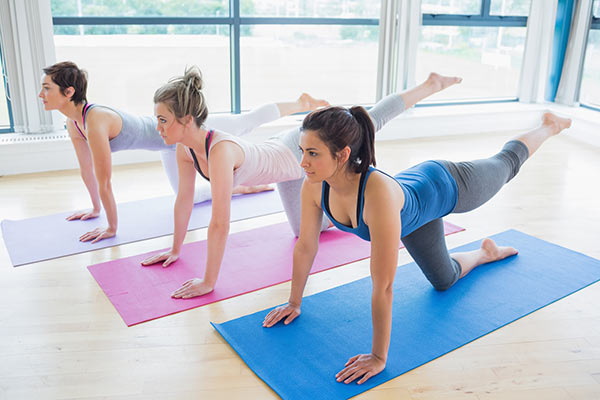 Specifically talking about the west, most of their yoga styles, followed by the people believing in fitness and yoga, have been derived from a type of yoga called Hatha yoga. Being a general term, Hatha yoga actually refers to one of the branches of ancient philosophy of India. The Hatha yoga uses a combination of moral discipline and physical exercises to help people achieve control and maintain balance between mind and body. The hatha yoga includes many aspects of yoga like postures called asanas, breathing and meditation. However the people in the west were able to adopt only the physical parts and could not practice the moral disciplines and even the breathing and meditation. Since each yoga style is meant to focus on different aspects, without following all the basic principles of hatha yoga it is not possible to attain the mental balance just by practicing physical exercises.

One of the styles of yoga is called Asthanga yoga. Those who believe that fitness and yoga are to increase strength, stamina and flexibility of the body should practice Asthanga yoga. However this style is not recommended for beginners because the participants are required to jump from one asana to other. Also if they find it very demanding, the difficult level might discourage them. For those who are not new to yoga and want to concentrate on increasing strength, flexibility and stamina, Asthanga yoga is the best option. They should however be ready for one hour of jumping from one posture to another.

One of the American developments of Ashtanga yoga is also called power yoga. This yoga also contains some parts from outside Ashtanga yoga as well. Power yoga is said to be good for athletes and those who want to tone up their body.

Another type of yoga made of 26 Hatha yoga asanas is called Bikram yoga. Since it is practiced in a heated room, it is also called hot yoga. Because of the heat it is possible for the participants to go into deeper poses in safer manner.