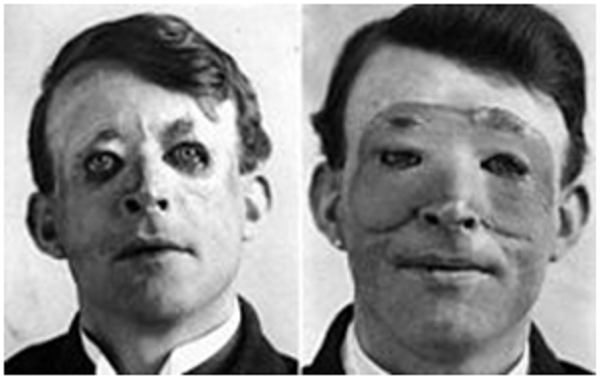 As long ago as 3000 BC, repair of broken noses was carried out by the Ancient Egyptians, and similar techniques were also followed in India from around 800 BC when reconstruction of damaged noses was undertaken. In Rome, techniques for repairing damaged organs such as ears were developed from as early as the first century BC.

In the West, doctors such as Joseph Constantine Carpue, an English surgeon, travelled to India to learn about their plastic surgery methods, and the first major plastic surgery in Europe was performed in 1815. Before the introduction of anaesthesia, such operations were painful, and the risks involved in surgery on the face and head meant that plastic surgery did not become popular in Europe until around the nineteenth or twentieth century.

With the introduction of disinfectants and sterile techniques, surgery became much safer, and the development of the first antibiotics such as sulphonamides and penicillin meant that plastic surgery could be planned and carried out much more safely.

During both the first and the second world wars the disfiguring injuries sustained by service personnel have contributed to the development of modern techniques in plastic surgery. Sir Harold Gillies, a New Zealand surgeon working in London, worked on many new techniques in World War One. He was responsible for setting up a dedicated facial injury ward which later became a new facial repair hospital in Sidcup. According to documents from the Royal Free Hospital in London, probably some of the most significant advances in plastic surgery occurred at this time.

Later, in the 1930s, Archibald McIndoe, Gillies’ cousin, joined his practice and was responsible for developing further plastic surgery techniques for the treatment of severe facial injuries and for helping disfigured servicemen to become reintegrated into society. Some of McIndoe’s patients at the Queen Victoria Hospital in Sussex became the “Guinea Pig Club” which had some very well known members such as the comedy actor, Jimmy Edwards.

Plastic surgery can include both reconstructive and cosmetic operations, and whilst surgery for repair of abnormalities caused by birth defects, disease or injury is normally carried out by health service surgeons, cosmetic surgery is not usually available through the NHS. Many appearance enhancing procedures are available and operations such as breast enhancement, facelifts and nose reshaping are available to help increase self confidence and improve your appearance. For people who are looking for a tummy tuck or, more properly, abdominoplasty Essex has practitioners who will be able to provide this procedure.

Plastic surgery has advanced over recent years, and has become more popular than ever as a way of gaining the features or body shape that you want. There are even other forms of minor body alterations now being performed more than ever.  http://future-form.co.uk are an established Bristol tattoo removal clinic that can wipe away those inky mistakes.  It is estimated that around nine out of ten cosmetic procedures are performed on women, and your surgeon will be happy to discuss the procedure in detail before you decide if surgery is right for you.