The main aim of the Viking Warrior was to die in battle. Not for them the peaceful death in bed, that got them nowhere apart from an eternity in limbo. For the Viking Warrior to be cut down by several foes, having slain a few first, was the only way to go. You had to have your weapon in your hand (the hand need not be attached to the body…) as you would need it when you got to the Viking heaven of Valhalla because you then got to feast and fight for all eternity with the God Odin and all the other hard nuts that had been slain before you. There was the odd wench too, apparently for a half time break in between.

If you were “lucky” enough to be slain in battle, then the first indication that you were being relocated to the afterlife was when a chariot driven by a Valkyrie (a female warrior, wearing about the same amount of metal armour as a tin tack) turned up and asked you to get on board. If, despite the mortal wounds, you were able to do so it meant you were probably dead. In many ways it was a bit like hiring an Employee Relocation Company like http://www.dtmoving.com/relocation-services the difference being their staff are fully clothed and the transportation won’t be via a horse drawn vehicle. 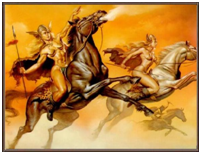 One wonders what kind of conversation you would have had with the Valkyrie as she ferried you to the realm of Asgard where Valhalla sits. Perhaps they weren’t that chatty. If all they had to do was hang around battlefields waiting for you to kark it in conflict there isn’t much more you can say to them apart from, have you been here long? Do you feel the cold in that lack of armour? What’s the horses names? Did you see me decapitate that Saxon a minute a go before three of his mates speared me in the back? To which they can only reply; No, not long, No, I don’t feel the cold I’m an anthropomorphic personification of war and we don’t get out much, Gler and Skiedbrimir and Yes, I did see that, um, well done. Thank Odin here’s the castle…

When you got to Valhalla and entered into the mighty hall the thousands slain before you would cry a welcome and generally get involved in a lot of backslapping. This might have taken a while but as you’re there for all eternity or until the Ragnorak, whatever comes first, you’ve got plenty of time. If you’d like a modern equivalent to give you an idea, it’s a bit like a rowdy sports pub, you’ve just scored the match winning goal in the FA Cup final only to be sent off immediately after the restart and then gone straight into the pub.

What’s on the Valhalla menu? Roast Boar, and lots of it as the Boar regenerates itself and if you get hurt in a dust up with your fellows then don’t worry all injuries heal themselves by the evening.  There are vats of wine to wash it down and for entertainment the stanzas of heroes are read out. If that’s the afterlife it doesn’t sound so bad does it?