The Alpine Mastiff, Bernhardiner or St Bernard dog is a large, actually giant, working Dog famous for its ability to orchestrate mountain rescues and slobbering a lot. The national Dog of Switzerland, it is traditionally seen with a barrel around its neck that has a little tap and the letters XXX written on it. This is to give the lost person a revitalising alcoholic drink so imbibing them to get down the mountain.  In one film Donald Duck drinks too much of it after being rescued and the rescue dog join’s in with him. They start singing badly and loudly. 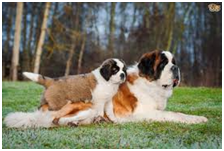 Ok so that’s the Disney cartoon version of the famous Dog and whilst the dogs did not organise the actually rescue they were certainly used for them. It’s also thought that the bit about the barrel under the chin is true as well. This follows on from a famous painting by English master Edwin Landseer in 1820. It features two St Bernard’s trying to awaken a stranded mountaineer. They are a huge 90 cm high with a smooth coat and long hanging tale. Imagine trying to find somewhere for them to stay whilst their handlers were on holiday? Although I’m sure Dog Boarding Surrey firm https://nestledownboardingkennels.co.uk/ would have been able to help, if they had been a bit closer to Switzerland. They were originally known as Alpine Cattle Dogs used for farming. They were so large they were able to herd animals but also provide much needed protection against wolves and bears that were quite numerous in the mountainous regions. They are a working Dog and a hard working one at that.

The name St Bernard is derived from the Monks that bred them at a Hospice located at the Great St Bernard Pass. This is an ancient pass that links Italy and Switzerland and has been used since ancient times. As it provided a gateway across the Alp regions there were many merchants and traders that used the pass and would get lost. The Monks and the Dogs were on hand ready for rescues. Hard to believe but the most bravest and successful rescue Dog was called Barry, although it’s more likely it was pronounced Berry in Swiss. Barry was responsible for getting a small boy to climb on his back and ride down a mountain with him, although that’s possibly just a story, but he was recorded as being involved in anywhere between 40 to 100 rescues of stranded travellers and mountaineers.

The dogs we see today are different from the traditional St Bernards as they are now all cross breeds. There is a reason for this. During two particular hard winters in the 1800s many of the breeding stock were lost to avalanches whilst on rescue missions. They were crossed with the Newfoundlands and this meant they lost the sleek fur to have it replaced with a long fur. The snow weighs down the dogs so they can’t function in the weather.  The dog enjoyed a renewed popularity following the Beethoven films and comedian Bernie Winters dog Schnorbitz.