Fashions come and go but some garments remain in the most part with a few tweaks and additions made over the years. This is how it has been for the shirt. There have been numerous changes to this staple garment since the 19th Century and we now have an array of options to choose from including formal wear right through to stylish Mens Farah Shirts. Here are some of the top changes since the 19th Century.

Early 19th Century – the length of the shirt was increased so that it covered the torso and upper legs. This allowed it to be worn over tight fitting trousers and also as an undergarment to keep the wear warm in the colder weather.

Mid 19th Century – women were becoming frustrated with having to wash shirts that were only dirty at the collar and cuffs and Hannah Montague in New York developed a detachable collar that allowed her to remove it from the main shirt and wash separately. 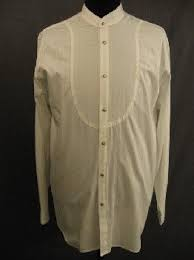 Late 19th Century – by 1871 Brown, Davis & Co had developed and patented a shirt that buttoned all the way down. Up until this point most of the shirts that had been designed still had to be pulled on and off over the head.